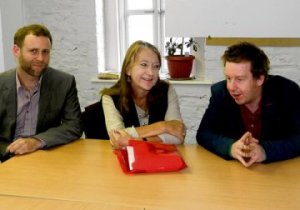 Did you know there was such a thing as National Short Story Day? Me neither! But apparently it is taking place in the UK today, aptly enough on the shortest day of the year. Since we didn’t all perish in the Mayan apocalypse, what better way to celebrate than by kicking back and enjoying some amazing short fiction? There’s lots of recommendations and stories available to read or listen to over on the National Short Story Day’s website.

Today, the Irish Times also features a thought-provoking conversation that took place between three short story writers — Kevin Barry, Éilís Ní Dhuibhne, and Will Boast — at the Cork Short Story Festival earlier this year. Here’s some of the highlights and you can read the full interview here.

Éilís Ní Dhuibhne on why she is drawn to the short story:

“The short story suits people who are halfway between fiction and poetry. It’s a more poetic form. It also has a neatness, and because of its relationship to time is much more manageable.

“What I don’t like about writing a novel is that I change, and by the time I’ve got to the end I’m not interested any more.”

Kevin Barry on whether there was a more hospitable environment for the short story in 2012:

“For a while, going into a publisher’s office with a collection of stories was like dragging a corpse in. One reason stories are flourishing again is that there are more places to submit them. Writers respond to platforms for their work.”

Will Boast on what dominates a short story for him — plot, character, theme or something else?:

“A discreet emotional problem. Plot hardly matters at all to me. If there is something a character hasn’t worked out – that’s the story for me.”